Functional Movement Screen (FMS) is the screening tool in use to identify limitations.  Also, with asymmetries in seven fundamental movement patterns that are key to functional movement quality. Likewise, this can occur in individuals with no current pain complaint or known musculoskeletal injury. 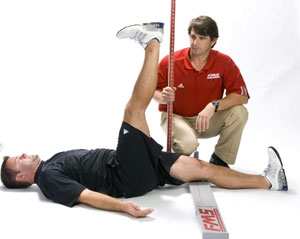 Firstly, these movement patterns are in placr to provide observable performance of basic loco motor. This includes, manipulative and stabilizing movements by placing an individual in extreme positions. Thus, where weaknesses and imbalances become noticeable if appropriate mobility and motor control is not there.

Secondly, FMS is a ranking and grading system that documents movement patterns that are key to normal function. Initially, by screening these patterns, the FMS readily identifies functional limitations and asymmetries. Thus, these are issues that can reduce the effects of functional training and physical conditioning and distort body awareness.

The Functional Movement Screen (FMS) is an innovative system.  It is to evaluate movement pattern quality for clients or athletes. It also allows the clinician to use a simple and quantifiable method of evaluating basic movement abilities. However, the key to the Functional Movement Screen is that it consists of a series of seven tests with a simple grading system. Finally, the FMS allows a clinician to begin the process of functional movement pattern assessment in individuals without pathology.

The FMS is not there to diagnose orthopaedic problems. But, rather to demonstrate limitations or asymmetries in healthy individuals with respect to basic movement patterns. On the whole, FMS is a useful starting point to identify limitations of movement or instability that could develop into an injury site. In conclusion, once an area of weakness or limited movement had been identified we then use a more detailed orthopaedic screen of the site for further investigation.

Why not contact Tuam Therapy Centre for a Functional Movement Screening assessment.
Presently, the centre is run by Dr. Daryl Coyne, a consultant Chiropractor with the European Golf Tour.